When asked prior to the festive period, two-thirds of consumers expected their Christmas celebrations to be different from previous years.

Those in Germany and the UK were prepared for the most change - most likely due to the sudden lockdowns and strict tier systems announced for them in December. Germany was predicting the biggest difference at 73%.

However, when asked after Christmas how different their celebrations really were, the UK came out top. 83% of Brits said their plans were impacted by the pandemic, which was also much higher than predicted. 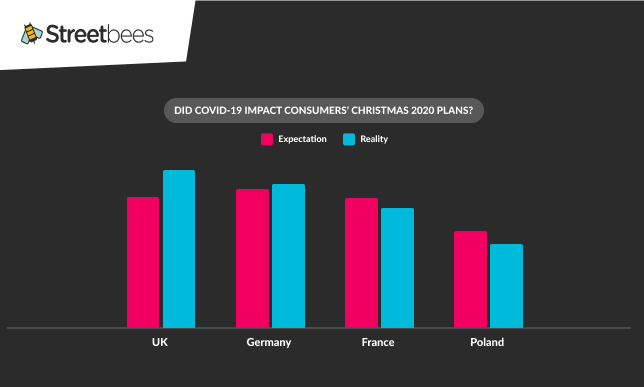 Countries like Poland and France saw less change than they expected. Although these consumers still made a point to avoid socialising, they were actually able to see more friends/family than initially planned.

Generally speaking, the biggest change to most people’s Christmas came down to who they were able to see and celebrate with.

But people made sure to make the most of the situations as is evident through the photos that our bees shared with us. Whether alone or in the company of others - the vast majority still tried to create the Christmas spirit and enjoy as much as the situation allowed.